Canon’s 20.2-million-pixel G7 X is the firm’s first-ever compact camera with a 1-inch type sensor, marking an entirely new line in the Canon range. Jon Devo tests it out

See our gallery of sample images of the G7 X

Around five years ago, Canon invented essentially a new class of camera. The Powershot S90 combined decent image quality and enthusiast-friendly controls in a truly pocketable form factor. For a while Canon had this section of the market almost to itself, with successive iterations of the S series holding the affections of photographers who wanted a small camera to carry around with them at all times, without completely sacrificing creative control.

This all changed in mid-2012, when Sony announced the Cyber-shot RX100. This took the same essential concept but used a much larger, 1-inch type 20-million-pixel sensor for vastly better image quality. The RX100 captured the imagination of serious photographers, and along with Sony’s later models, the RX100 II and III, it has been essentially unchallenged since as the serious photographer’s pocket camera of choice. Now Canon has hit back again, with the Powershot G7 X. 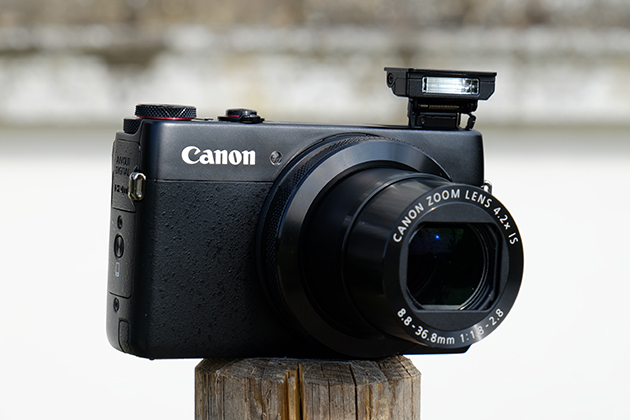 The G7 X looks very much like an S-series Powershot, and is only slightly thicker; at first glance you might be forgiven for mistaking it as a minor update. But like the RX100 series it uses a 1-inch type 20-million-pixel sensor, offering sensitivities up to ISO 12800, which we have to assume will be a very similar unit. This makes it the first direct competitor Sony has faced in this premium enthusiast compact sector.

The G7 X’s trump card, though, is its lens; a 24-100mm equivalent optic with an impressively-fast f/1.8-2.8 maximum aperture. This covers a range from landscape-friendly wideangle to short telephoto for portraits, while offering a fast aperture that’s good for low-light shooting, and should allow some creative background blur. Purely in terms of specification, the Canon’s lens beats both the 28-100mm equivalent f/1.8-4.9 used by the RX100 and RX100 Mark II, and the RX100 III’s 24-70mm equivalent f/1.8-2.8.

This combination of lens and sensor makes the G7 X pretty exciting, but Canon has also paid a lot of attention to building a photographer-friendly control layout. It has a top-plate exposure compensation dial, with a +/- 3EV range in 1/3 stop increments. There’s a control dial around the lens for adjusting exposure settings, and many photographers will be delighted to hear that unlike on the RX100s, it has click stops to give tactile feedback that settings have been changed.

The G7 X features a touch-screen LCD that can flip upwards for waist-level shooting, and even face fully forwards for self-portraits. But it can’t tilt downwards or sideways, which limits its usefulness compared to the fully articulated screens that users of older Canon G-series models will fondly remember. The touchscreen allows you to position the AF point anywhere in the frame just by tapping on the screen, and can also be used to release the shutter if you want.

In terms of video, Full HD recording at 1920 x 1080 pixels resolution is available at up to 60 frames per second. When the mode dial is set to the dedicated movie position, full manual exposure control is available; in other modes, video recording settings are fully automatic. Sound is recorded via stereo microphones on the top plate.

Like most modern cameras the G7 X has built-in Wi-Fi. It’s also equipped with NFC for easy pairing with a smartphone or tablet, and simply tapping the devices together will establish a connection and open the Canon app. There’s also a dedicated button on the side of the camera for firing up the connection, for use with devices which don’t have NFC.

One area of possible concern is battery life; the G7 X takes the NB13L battery, which offers just 210 shots per charge, or 310 with the camera set to its power-aving ‘Eco’ mode. We expect most serious users will want to carry a spare or two.

The Canon Powershot G7 X is the first model to directly challenge the Sony RX100 series in the 1-inch sensor, pocketable camera class, and from our initial handling of the camera it looks like Canon has a particularly strong contender on its hands. The lens offers a very impressive combination of zoom range and maximum aperture, and we think the control layout will be viewed more favourably by stills shooters too, with the top-plate exposure compensation dial and click-stopped lens ring.

The Canon doesn’t have everything its own way, though; the Sony RX100 III has a built-in pop-up electronic viewfinder, and should have the edge when it comes to video image quality. The RX100 series’ clickless lens dial is also favoured by video shooters for changing settings while recording.

Overall though we’re pretty excited by the G7 X, and it’s great to see some real competition in this category at last. The Canon looks like it should be a very strong contender, too, so check back for our full review when we’ll tell you in detail how it performs.