Canon EOS R5 at a glance:

After months of building up the hype around its new flagship full-frame mirrorless model, Canon has finally officially announced the EOS R5. This 45MP camera will go on sale at the end of July, for £4,200 body-only. 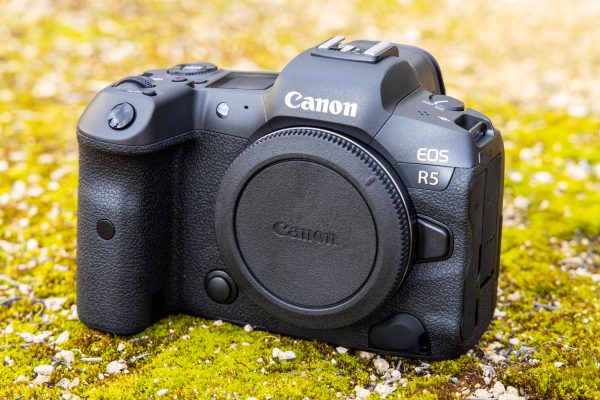 Read our previous detailed first look at the EOS R5’s body and design.

The camera’s most eye-catching specifications are surely to do with video. It’s the first mirrorless model ever to be capable of recording DCI 8K raw video internally at 30fps, and Canon says it can do so for up to 20 minutes. Equally impressively, 4K video recording is available at 120 fps. To deal with the data rates involved, it employs a CFExpress card slot alongside a more conventional UHS-II SD slot.

Of course the EOS R5 is extremely well specified for stills photography, too. Its 45MP sensor provides a speed range of ISO 100-51,200 as standard, that’s extendable to ISO 50-102,400. Meanwhile it can shoot at 12 frames per second using its mechanical or electronic first-curtain shutter, and 20 frames per second using its silent electronic shutter.

In terms of autofocus, Dual Pixel CMOS technology enables 5,940 selectable autofocus points, covering 98% of the image area. Canon claims an AF acquisition time of just 0.05secs, along with low-light sensitivity of -6EV. The firm’s deep-leaning AI technology powers face and eye detection, along with subject tracking for animals such as dogs, cats and birds.

Like the R6, the EOS R5 gains 5-axis in-body image stabilisation. Given that these are its first two cameras to include this feature, the firm’s claim of the ‘world’s best stabilisation’ is striking, with up to 8 stops claimed with certain RF lenses, including the 24-105mm F4 L, 28-70mm F2 L, and 85mm F1.2 L optics. When an optically stabilised lens is used, it corrects for yaw and pitch, while the body compensates for roll around the lens axis along with vertical and lateral movements.

On the side you’ll find microphone, headphone, USB-C, HDMI and PC-sync flash ports.

For viewing the EOS R5 employs a large, high resolution 5.76m-dot electronic viewfinder, with 0.76x magnification and a refresh rate of up to 120fps. This is complemented by a 2.1m-dot 3.2in fully articulated LCD. As on the EOS R6, an eye sensor switches between the two automatically, and is disabled when the screen is flipped out.

There’s an E3-type remote release connector on the front, and an IR remote receiver on the handgrip

As befits its high-end positioning, the EOS R5 sports Canon’s E3-type remote release connector beneath a rubber cover on its front. It also has an infrared remote receiver on the handgrip. Wi-Fi and Bluetooth are both built-in, too, allowing remote control of the camera from your smartphone.

Along with the same BG-R10 grip as used by the EOS R6, the EOS R5 also compatible with a new WFT-R10 vertical grip that integrates pro-spec Wi-Fi and Ethernet connectivity.

This is looks very similar to the battery grip, and likewise accepts two batteries and provides a duplicate set of external controls. But it’s physically slightly larger, and features a prominent RJ45 ethernet connector.

Just like the BG-R10, the WFT-R10 has a duplicate set of controls

Pricing and availability for both the Canon WFT-R10 and Canon BG-R10 grips is still to be confirmed.